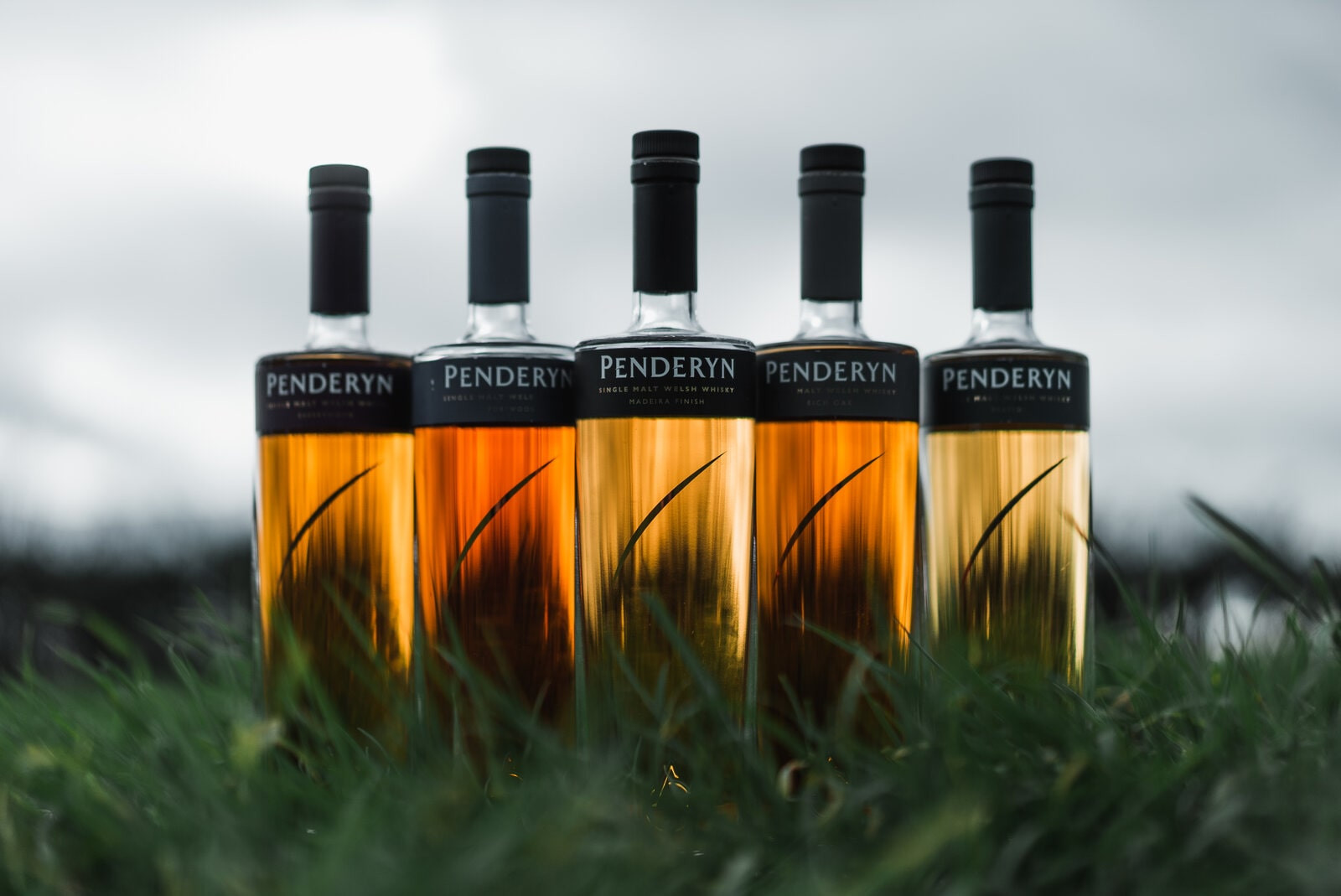 In temporary exile from Berlin, guest blogger Allison Williams has spent part of the year trying to recreate the city’s snacks and drinks but has also rediscovered Wales’ own distinct pleasures, seeking inspiration from the national poet (who incidentally bears no relation to Berlin by Food’s host, who has yet to acquire a taste for whisky). Read on to the end for recipes and look forward to a Welsh bar opening in the German capital in future.

Welsh cuisine is not all about leek and lamb. We have bara brith, teisen lap, and laverbread, a slimy seaweed snack that has yet to take the world by storm but shares certain elements of sushi. While shielding, I have tasted my way through these delights and have also started making them myself. Who knows, when I return to Berlin, I might open a Welsh café?

Or perhaps a bar? After all, alongside a lot of tea, I’ve also had time to try making kombucha, traditional elderflower cordial and rhubarb champagne.

But Wales has stronger drinks too and when it comes to the really good stuff, I let our national poet be my guide. Dylan Thomas, famous for “Under Milk Wood” and poems such as “Do not go gently into that good night,” and infamous for his drinking, had a known penchant for whisky.

Scottish and Irish distilleries might be better known today, but Wales is rapidly reviving its erstwhile thriving whisky production.

Thomas liked to drink at Brown's Hotel in Laugharne, whose menu today features one whisky – Penderyn Legend – that he would not have drunk himself but which the distillers like to think he would have enjoyed.

In a short time, the distillery has made a name for itself not only for quality but for its all-woman distilling team. Penderyn is now exported to almost 50 countries. “Not bad for a start-up that began with a conversation in a Welsh valleys pub in 1999, when a group of friends decided to bring back distilling in Wales after more than 100 years,” says Penderyn manager Jon Tregenna.

It is a light, fruity whisky that tastes different partly because of the way it is made, he explains. “We use a unique still designed by Dr David Faraday, which creates a spirit at around 92% alcohol by volume. Traditional Scottish and Irish stills create a spirit around 70%, so our still gets rid of more impurities and heavier oils, and works more quickly with the casks we mature our whiskies in.”

This is known as a “sunshine” whisky in California. Whereas that state has no need of more sunshine, it certainly does bring some light to this notoriously wet part of the world.

A few months ago, Penderyn opened a new distillery in a historic school building in Llandudno, a Victorian seaside town in North Wales.

Llandudno already had its own gin, named after Great Orme, a towering rock where Kashmiri goats roam. It comes in three flavours, starting with the signature Thyme, Gorse and Blackcurrant, all local botanicals. There is also a rhubarb and mint Great Orme gin, and one with a spicier orange and ginger flavour.

Small distilleries are dotted throughout the Welsh landscape that is dominated by castles, sheep and the occasional low-flying plane.

Some 100 miles due south of Llandudno lies Da Mhile, a farm-based distillery whose name means two thousand, which is also the year when it was founded. The gin is flavoured with seaweed that is hand-picked from the beaches of West Wales. Fans can combine it with cheddar and “Welshman's caviar,” a dried and toasted seaweed snack.

Then there's Cygnet gin, made in Swansea, where Dylan Thomas was born. Cygnet's recipe was inspired by an attempt by two locals to cure cholera in the mid-1800s and contains juniper, lemon peel, lime peel, pink grapefruit peel, orange peel, liquorice root, cardamom seed and more.

But it’s not only about spirits in Wales and sometimes even Thomas drank gentler substances: “I liked the taste of beer, its live, white lather, its brass-bright depths, the sudden world through the wet-brown walls of the glass, the tilted rush to the lips and the slow swallowing down to the lapping belly, the salt on the tongue, the foam at the corners,” he wrote. He is said to have told a friend to stop at Brown's and order a Felinfoel – a beer still on the menu today.

Felinfoel's Double Dragon is a tangy red fruit flavour ale with hints of toffee, brewed by a family with long roots in south Wales. They were also pioneering when it came to canning beer, thanks to generations of work in the local tin industry.

Not far away – here nothing is far, even if travel takes ages – there is Monty's Brewery, where a former primary school teacher and her husband make beer. They offer a slew, from Mischief to Masquerade, but their top-selling brew is Sunshine, a golden, moderately hoppy, floral ale with a citrus aroma. (Yes, we really yearn for sunshine here.)

Thanks to climate change perhaps, there seems to be more of it on the horizon and there are even vineyards in Wales. The largest is a family-run affair named after Owain Glyndwr, who fought a long but unsuccessful war to end English rule in the Middle Ages. Glyndwr focuses on “cool climate varieties that are suited to our viticultural conditions in South Wales,” says manager Louis Norris.

As a small producer, a lot of care goes into ensuring production is sustainable. That interest extends to the chickens, ducks, wild pheasants and llamas which roam the vineyard, while hedges grow wild to encourage bird life.

Glyndwr also makes cider, since apples thrive in the region’s mild, damp climate. The Welsh have been making cider – and writing poems about it – since at least the 14th century and almost every farm continued this tradition until early into the 20th century. According to Bridget Craddock of Vale Cider, the motto was “no cider, no work”. Her family grows Welsh heritage apples – 53 varieties – to make ciders such as Serious Scrumpy, deep in the Vale of Glamorgan, along with cider vinegar, apple butter and a range of seasonal treats.

The art faded as agriculture became more mechanised, but Seidr Crefft Cymru, as craft cider is known here, is coming back because it is simply better, insists Craddock. “It just tastes much more apple-y. You'll really get that apple flavour, while a lot of the commercial brands are really very diluted.”

Some of Vale Cider’s offerings are flavoured with blackcurrant or autumn and the company also makes apple mincemeat – for mince pies, not the hamburger variety.

Other local ciders include Gwynt Y Ddraig, whose name means “breath of the dragon.” It began as a hobby in a back shed and is now a prize-winning oak and draught matured cider.

Dragons are everywhere in Wales, thanks to the flag that was adopted in the fifth century by the kings of Aberffraw when the Romans withdrew from Britain, though the dragon was also a popular Roman emblem of war.

The Welsh dragon became known as the Red Dragon of Cadwaladr, king of Gwynedd from 655; in 1485, Henry Tudor, soon to become Henry VII, flew a dragon flag at the battle of Bosworth in 1485, to show he was descended from Cadwaladr.

Those flags are still draped over people's front doors, across car windshields or flapping above garden sheds, hopes still flying high even if we disappointed in the football tournament.

But you can’t drink a flag, so here’s a cocktail for you:

Shake all ingredients with ice, strain and serve garnished with a snapdragon.

Or the green-coloured Hen Wlad Fy Nhadau, which takes its name from the first line of the unofficial Welsh national anthem. You can hear the song at football and rugby games, or tune into Welsh tenor Bryn Terfel's version online.

Pour the ingredients into a cocktail shaker filled with crushed ice. Shake well. Strain into a chilled cocktail glass. And get the party started.

Whatever you're drinking in these difficult times, good health, be well and Iechydd da!