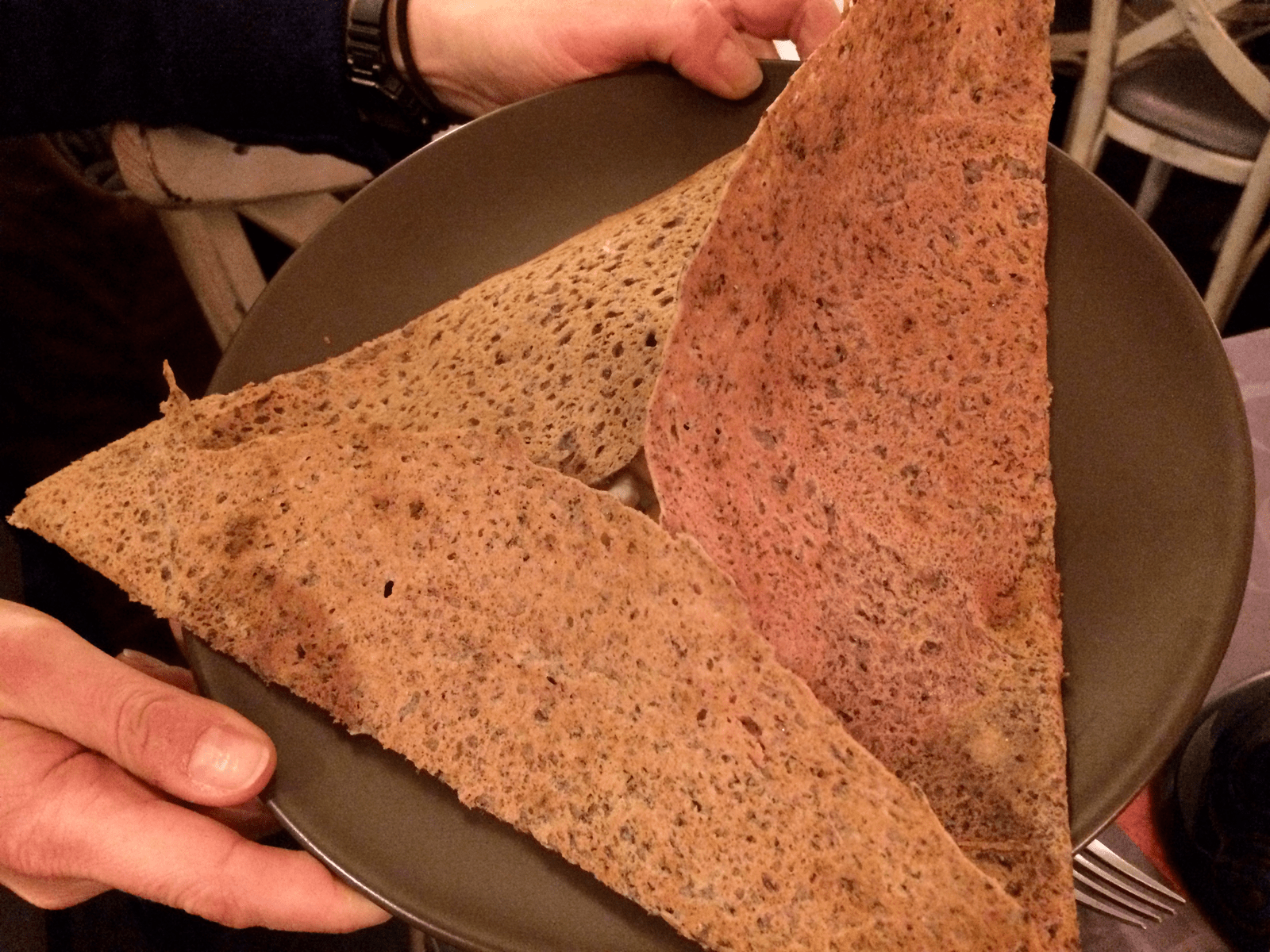 Anne Thomas delights in the most glorious of moveable feasts and reminisces about some delicious creperie experiences before getting the frying pan out at home to usher in the spring. She also displays a certain uncharacteristic intolerance with regard to toppings.

Happy Pancake Day! Britain’s unofficial national day is one that I am happy to observe religiously each year. There’s no reason not to. After all, this day is only about devouring one of the most delightful foods from dawn to midnight; and it has become so detached from its pagan and Christian origins and is so uncontroversial that it can be celebrated by anybody, whatever a person’s creed, political opinion, background, sexuality or bank balance. What about vegans, I hear you say? Not an issue, eggs are optional and oat milk is all the rage these days. Those who are gluten-intolerant? Just use buckwheat. Dieters? Ah, now you’re got me.

But seriously, the only thing that’s potentially divisive about Pancake Day is the topping. Though merely if you’re being contrary because there is nothing to argue about here. There is only one topping and that’s lemon and sugar, of course (I can’t believe you needed to be told). Anything else is an abomination.

I’m open-minded, I assure you. As a child, whether my New York (suburb) grandmother served up a stack of thick, fluffy pancakes drenched in maple syrup for breakfast or my Paris (suburb) grandmother put a pile of crêpes and some strawberry jam on the table, I was always delighted – which child wouldn’t be? – and would gobble them all down in minutes and clamour for more. I’ve since ventured into even more unchartered topping territory.

But not in England. Given that the country is hardly reputed for its balmy climes and nobody is ever likely to confuse its southern shores for the Amalfi Coast, one might wonder why lemons play such a crucial role on this day. I did actually try to find out, but Google only had obscure explanations; apparently, not all information is available at the click of a mouse. Anyway, I digress. What matters here is that the absolutely perfect syrupy combination of sweet and sour marries so well with a hot pancake that no other topping should even be considered.

Just as an English pancake without lemons is not a pancake, a Pancake Day without a race is simply not the same. Ever since the 15th century, women wearing aprons and a headscarf have run up England’s streets with a frying pan in their hands flipping pancakes. In these enlightened days of gender equality, most events are now mixed. There’s even an annual Parliamentary Pancake Race that raises funds for charity. Though at times a little disorderly, the pancake races are considerably more sedate than “mob football”, which used to involve whole villages and towns playing a medieval form of the sport on the highway. Anything except murder and manslaughter was allowed, though “unnecessary violence” was frowned upon. The tradition fell flat (sorry, couldn’t resist) in the 19th century and I’m sure we’ll all agree that it’s good there is no Parliamentary Mob Football Match today (or is that just Prime Minister’s Question Time?).

This year, lockdown oblige, there will be no races, but pancakes are allowed and their symbolism this year feels more appropriate than ever. This starts with the ingredients – eggs and milk symbolise fertility, flour is the staff of life and salt represents purity and springtime – and continues with their shape, which exemplifies the sun, and their yellowy colour denoting light and warmth.

In pagan times, as the god of fertility, vegetation and springtime struggled with the evil spirits of cold and darkness, people would encourage spring’s arrival by eating pancakes for a week.

As Christianity began to dominate, the week was shortened to just one day: Shrove Tuesday, which for a long time was a half holiday in Britain, marked (and for Christians continues to mark) the end of Shrovetide, a time to consider sins, confess and repent in order to be shriven before the solemn Lenten season of abstinence.

The bells would ring and call the faithful to church before they went out to play. Pancakes used up all the leftover rich foods before the fast.

While England has only one pancake day, France is blessed with two: La Chandeleur (or Candlemas, 40 days after Christmas) and Mardi Gras (Fat Tuesday). And in Brittany, particularly, the pancake is actually a philosophy. On Candlemas, young brides dunk their wedding rings in the batter to ensure them a happy married life, the first pancake is left to dry on a cupboard all year to protect the house. According to legend, if you’re able to flip a crêpe with your right hand while holding a coin in your left, you’ll be prosperous all year round.

It’s when I visited Brittany for the first time that I understood I had been missing out all my life. Though there are crêperies all over France and I had enjoyed galettes (buckwheat pancakes) many a time, eating them in this heavenly region I was transported to another plane. If you’ve not had the pleasure, I would suggest you make a beeline as soon as it’s allowed. I’ll see you there.

If Brittany is not doable then Paris is your next bet, particularly the area around la Gare Montparnasse, where a concentration of crêperies serve more than acceptable savoury galettes (the classic “complète” features cheese, egg and jambon) and sweet crêpes (with caramel au beurre salé or crème de marrons or jam or simply sugar or chocolate or, mon dieu, just give me lemon and sugar!) and most quaffable cider, but if you’re this close to the station what’s really stopping you from hopping on a train and heading west?

In fact, the closest I have got to the Breton experience in Paris is at Breizh Café, which has a few restaurants around the French capital on top of its St Malo and Cancale branches, and also a shop where you can buy both the flour and the equipment for making your own crêpes at home. I cannot laud the food enough but, regrettably, my passion is shared by many others and the queues are long. During le confinement, Breizh is apparently delivering, unfortunately not all the way to Cambridge.

Nor to Berlin either, presumably, but the German capital also boasts some very decent crêperies, which are currently open for takeout. After the pandemic (like winter, it too will come to an end eventually), if you want a proper sit-down meal, you’ll find a fine selection of galettes and crêpes at Suzette in Prenzlauer Berg or the more traditional La Bigoudène in Mitte and the utterly charming Crêplala in Charlottenburg, which also has a lovely terrace. Also, track down Martin’s Crêperie, often found at Markthalle Neun but also at other markets: There may be fewer options regarding toppings, but the pancakes are made to perfection.

Oddly enough, France does not have a monopoly in the field; it is matched in variety by Russia where blini are a quintessential part of life and have even entered the language. One of my favourite proverbs is "первый блин комом" (“Perviy blin komom" or "the first pancake always turns out wrong”), which can be applied to all areas of life; the euphemistic form of a popular swearword that it would be too unladylike to put in writing is blin.

If England has one Pancake Day and France has two, Russia is fortunate to have seven in a row, having maintained the pagan custom. Maslenitsa (“butter week”) is traditionally a time for boisterous snowball fights, socialising and indulging in activities frowned upon during the Lenten season. If you’re lucky enough to be in Russia at this time, you could be in for one of the most pleasurable, if fattening, eating experiences of your life. Wherever you go, you’ll be greeted with a tower of pancakes and a range of toppings, from smoked salmon and caviar to honey and smetana (the sour cream that is literally served with everything) and offered shots of vodka to battle the cold.

Even if you’re not fortunate enough to experience this, any visit to Russia will involve copious amounts of pancakes. There might be small thick oladi freshly whipped up by your host for breakfast, served with homemade jam, honey and smetana, for lunch there might be thinner buckwheat pancakes filled with mushrooms or cabbage and in the evening you might attend an event where mini caviar-topped blinchiki accompany the champanskoe.

For a taste of Russia in Berlin, I highly recommend Datscha, Pasternak and Tadzhikische Teestube.

Of course, much of this is hypothetical in a time when non-essential travel is prohibited and many restaurants are closed. However, the good news (so rare in 2020/21) is that you don’t have to go to Brittany, St Petersburg or Berlin to indulge in the simple pleasure of pancakes. Indeed, the best ones are home-made, with just a squeeze of lemon and a sprinkle of sugar.

If you don’t already have one, here’s a failproof recipe from Britain’s unique Delia Smith.

I hear the church bells ringing, it’s time to get mixing, stirring, frying and tossing.

How not to go hungry at the Berlinale