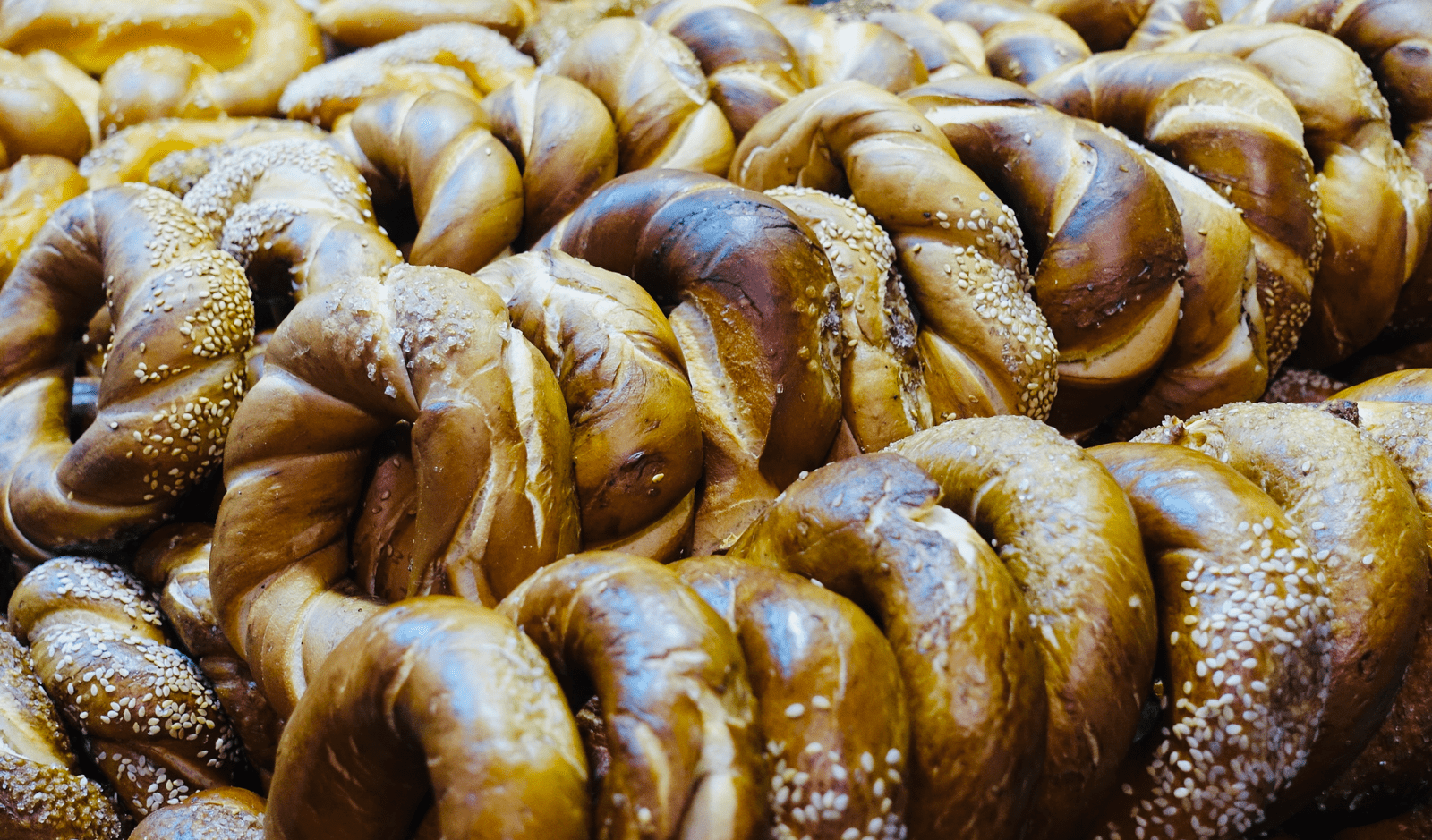 Anne Thomas reflects on the past while fattening up on bagels.

"A summary of every Jewish holiday: They tried to kill us, we won, let's eat!" said Alan King.

This post provides a selective tour of Jewish eateries in Berlin, as well as an insight into the books, podcasts and shows that have been providing me with spiritual nourishment this past month. But it begins with a moment of silence.

For today is Yom Ha Shoah, Holocaust Remembrance Day. Two years ago, I was in Tel Aviv, not far from Carmel Market, in a vibrant district where locals and tourists jostle gently, buying vegetables and spices, stopping for a coffee or a limonana, gorging on malawach or rugelach or just soaking in the atmosphere.

At 10 a.m. the siren went off and Israel stood still. The cars came to an abrupt halt. People stopped in their tracks to commemorate the dead and the survivors with two minutes of silence.

It was the first time I had experienced this collective commemoration. I will never forget.

Some have calculated that one would need to be silent for 11 and a half years to remember the six million murdered Jews; many more to remember all the victims of the Nazis.

My colleague in the Stolperstein team, the sculptor Michael Friedrichs-Friedlaender, who now makes all Stolpersteine says that, at his current rate, he would need to work for over a thousand years to make them for all of the victims.

Stolpersteine are placed in front of the former homes of Jews, Roma, homosexuals, resistance fighters and others who faced Nazi persecution. There are some 80,000 all over Europe.

When coronavirus brought the world to a standstill, our team had to make some unprecedented decisions.

Gunter Demnig was about to embark on a long tour of the Netherlands, followed shortly thereafter by Spain and France. Many ceremonies had been planned to commemorate 75 years since the liberation of the concentration camps and the end of the Second World War.

All of the installations were cancelled, but Michael continues to make Stolpersteine, to be placed - hopefully - later on this year.

I was reading Santiago Amigorena's Le Ghetto intérieur when rumours began to circulate in Germany that borders were going to close, and we would soon be confined to our homes. This kept everything in perspective; despite all the uncertainty, the fact that I could not travel for the first time in my privileged life although I am the bearer of several passports, I could keep in touch with my loved ones via internet and I knew that we would probably be safe so long as we stayed home.

In this masterpiece, Amigorena recounts the story of his grandfather, a Jewish Pole who emigrated to Buenos Aires in the late 1920s, fell in love, had children and was very happy, until - in the early 1940s - it slowly dawned on him that his mother in Warsaw was trapped. Overwhelmed with horror, guilt and a profound crisis of identity, he retreated into silence, a silence that would weigh down on the following generations.

Zazie Tavitian, a French musician who has become a journalist specialised in food, explores her family's silence in the harrowing yet life-affirming podcast "A la recherche de Jeanne". Using a book of recipes kept by her great-great-grandmother Jeanne Weill, murdered in Sobibor, she cooks with them and opens up a conversation with her relatives about the trauma and unexpressed feelings of guilt. As I listened and cried, I too made and ate her great-great-grandmother's rich chocolate cake and the pets de nonne, reminiscent of those of my own grandmother, who lived through the Nazi occupation of France that she would tell me about as she cooked.

Food also plays a connecting role in Unorthodox, a powerful memoir by Deborah Feldman, in which she recalls how she and her grandmother, who essentially brought her up and played a pivotal role in her life, prepared special dishes together for the holidays. She also describes the silence that would befall her grandmother, who had survived Bergen-Belsen but lost all her relatives, each time the Holocaust was mentioned.

Just as Germany went into coronavirus lockdown, posters went up all over the city advertising the Netflix adaptation of the book into a mini-series. As I watched, I recalled my last trip to New York, when I was also in Williamsburg, and wondered when I would return. I also wondered when the Berlin depicted would return, a carefree city in which strangers could dance, swim and make music together.

A city in which people could meet their friends and go out to eat.

I loved hearing Yiddish being spoken in the series. I come from a long line of New Yorkers whose speech is peppered with Yiddishisms. As the US comedian Lenny Bruce used to say: "If you live in New York or any other big city, you are Jewish. It doesn't matter if you're Catholic; if you live in New York, you're Jewish."

Or as Chaimie & Leizer from YidLife Crisis would put it, "Jew-ish". If you don't know them, you are in for a treat. Watch them now and donate. They have brought me no end of laughs and illuminated me on many aspects of Judaism, as well as "Chewdaism", of which I am now a fervent follower. And they actually asked me to schmear the word about them. If the borders are ever lifted and they can travel again, they're hoping to tour Germany.

Next year in Berlin?

In their mini-films, these guys explore Jewish culture and history, with their own distinct form of irreverent humour and a great appetite for food. From the forced comfort of my armchair, I have accompanied them on their field trips in Krakow, London, New York, Montreal and Tel Aviv, drooling as they literally stuff themselves.

They could be in for a shock if they finally get here because the Jewish food scene remains limited, in lockdown times even more so.

But there are a few pearls, for example Fine Bagels, which has been a lifesaver this past month. It was one of the first places to adapt to the new conditions in the city when cafes and restaurants were forced to close. They started delivering almost at once, providing grateful Berliners with challah (which incidentally features in the adaptation of Unorthodox) and matzos for Passover, cinammon and chocolate babka knots but above all bagels, schmears and lox.

If you are not like me and cannot imagine eating bagels for breakfast, lunch and dinner 24/7, you now have some alternatives. Beba is delivering "Jewish delicacies" that reflect the culinary wealth of the diaspora on Fridays, Saturdays and Sundays. And though I can't vouch for them as a non-meateater, you can get a takeaway Reuben or pastrami sandwich from Mogg if you're craving the deli flavours of New York or Montreal. Sadly, the Israeli joints Gordon and Mugrabi, which in "normal" times, provide fantastic hummus, shakshuka, roast cauliflower dishes and much more besides, are not yet re-open for business but a little bird tells me that this could all well change in May so keep an eye out.

In the meantime, I'll just keep eating those bagels. They say they are round to symbolise the cycle of life.

That suits me just fine! L'chaim!

Berlin is not Bologna but...